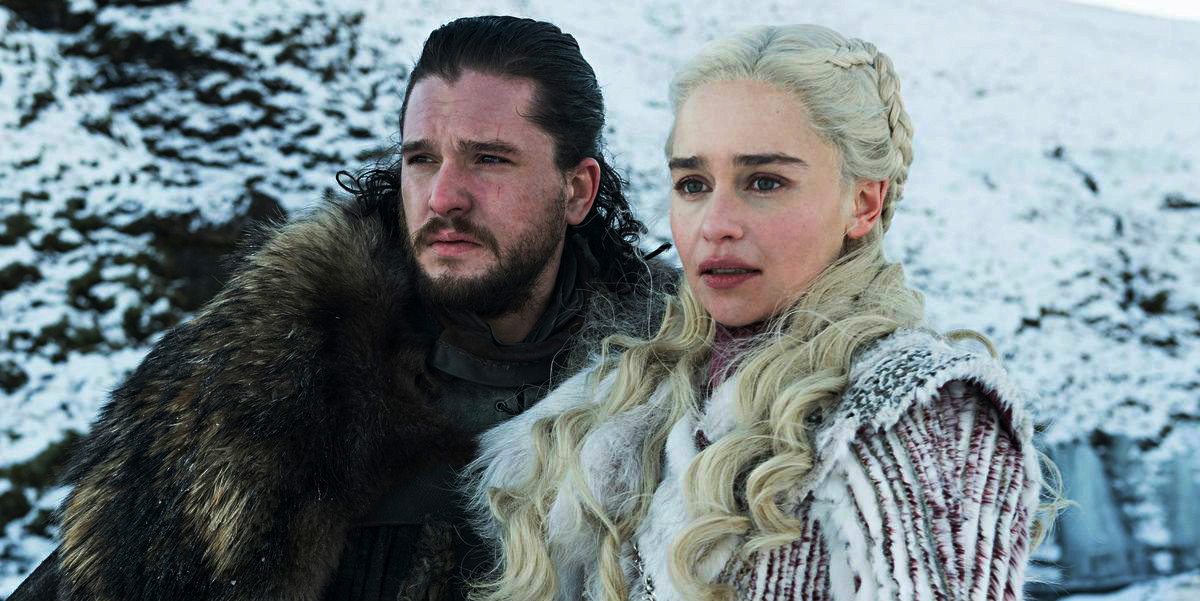 Whew, this Game of Thrones episode was definitely a strong one!

I don’t even know the title of the first season 8 episode, so either HBO really kept things under wraps or I was that successful at avoiding pre-season spoilers. As I type this I fondly think back to the terrible spoilers that leaked and a horrid, fan-fiction riddled season 7 that came into fruition. But I have high hopes for this one; and it is especially bittersweet that this may be the only end to A Song of Ice and Fire we receive, given George RR Martin’s current writing pace.

But enough of that, let’s get into the episode review. Shall we begin?

A few years ago, I had a YouTube channel. It was not very successful, but I had a lot of fun with it. On this channel, I covered many things and I made a video that has since been deleted. It raged on Jon Snow and his absolute and utter stupidity in The Battle of the Bastards. I am sorry to any Jon Snow fans, but I still dislike his character. Heck, after Season 5 of the HBO show I hate a fair amount of characters I love in the books. Arya used to be my favorite show character, until she decided to completely forget herself and take a stroll to smell the sweet Braavosi air with a death cult hunting her. I guess getting a haircut and holding her sword with the wrong hand was more important than living.

Sansa Stark still remains my favorite book and show character and I will forever be a Sansa Stark apologist. Say what you will, but that girl survived and has prospered despite hardship. She killed Littlefinger, who pretty much started the War of the Five Kings. Even Daenerys, who I loathe in the show but love in the books is tolerable in the adaptation despite Emilia Clarke’s best efforts to… ’emote’.

But Jon Snow, King in da Norf, Lord Commander, Bastard of Winterfell, then the True Ruler of the Iron Throne, The Seven Kingdoms, etc. I just cannot condone. The show has forgone various Westerosi customs in an effort to pacify the dumbed down masses (or at least that is how they treat their audience) but I simply cannot understand why The Northerners would place a bastard on the throne or make him even Lord of anything when Sansa is the rightful heir. Brandon Stark has decided to become a psychic tree, Rickon is dead (and no one still cares, poor thing), Arya doesn’t want Winterfell anyway and Robb is gone so by birthright it should be Sansa’s. Now Aegon gets the entire realm too?

So with these feelings in consideration, seeing Jon and Dany have a “How to Train Your Dragon” moment where he just hops on Rhaegal had me rolling my eyes. I wanted to die of cringe when the two are randomly dropped off near a cave and Drogon seems to egg on the incest. I can understand the symbolism of the caves in relation to Jon’s past relationship with Ygritte,  and that he rode on Rhaegal which was named for his father, Rhaegar – but C’mon!

Dany (at least in the books) grew up hearing stories from Viserys before he inherited the Targaryen madness. Surely he would have told his sweet sister that only the bloodline could “wake the dragon” or get near one.

Dany even brings up these stories in the teaser for episode 2 when Jaime is seemingly put on trial for his crimes. Unless, this is being retconned now that Tyrion had contact with the dragons while in Meereen. Or, Tyrion is a secret Targaryen, and Varys a Blackfyre as theories suggest. Either way, I hated that sequence.

I also remain unsure of what exactly Euron Greyjoy’s endgame is. Euron told Yara he wanted to “fuck the Queen” and he somehow manipulated Cersei into bed. Cersei then strategically strokes his ego by implying he was a great lover, much better than her twin brother. The illegitimate Queen then tasks Bronn the sellsword with killing Tyrion and his new best friend, Jaime Lannister.

The terrible thing is, I think Bronn might actually do it.

Yes, he did show loyalty to Jaime during the Field of Fire in season 7 when he forewent his bag of gold to try and kill Drogon with the anti-dragon ballista. The mercenary has shown loyalty to Jaime, but that love was lost on the younger brother Tyrion. He would kill Tyrion as he has nothing more to gain from the Imp. Last season, he made his stance clear on where he stood before the culmination of the silly “let’s show Cersei a wight and maybe she’ll help us” plotline.

It will be interesting to see what his ultimate choice is.

Heading North once more, Jon and Arya’s reunion was not what I expected. Obviously, Jon does not realize that his little sister is a member of a death cult who kept a list of names to kill as a lullaby over the years.

Jon also does not realize that Arya and Sansa are closer now that Littlefinger is dead. Because Jon Snow knows nothing. I did not expect Arya to threaten him in a way reminiscent of Cersei threatening Jaimie if he ever betrayed the family.

Could Arya have it in her to kill her dear brother?

And where is Ghost? Does the budget still not allow the direwolf to show his face?

Arya had two other fateful reunions simultaneously with the Hound and Gendry Rivers. The conversation with the Hound went as expected – there were unsaid emotions that spilled into insults and empty words. That is how those two always communicated, insulting one another while hiding their wounds. I think Sandor is proud of Arya and her survival. I guess we got his real emotions when Brienne informed him last season that Arya found her way home, and that she was strong.

The conversation with Gendry was everything to me. He even called her m’lady, which was a throwback to their time with the Brotherhood without Banners. And Arya…flirted with Gendry? I know the age difference is sizeable in the books, but in the show I desperately want Arya to find happiness even if it’s temporary. Before anyone says it no, she does not need a man to make her happy. But those two had something all those years back, and as Arya wanted Gendry did end up coming to work in Winterfell. Which technically makes her his lady. I think that’s pretty neat.

I do wonder what schematic Arya handed him, as she already has a  Valyrian steel dagger. A dragonglass dagger would never compare. Maybe she has other plans? Did her creepy psychic tree brother whisper something in her ear about possibly needing one without giving a reason?

The shift in Brandon Stark from touching that last weirwood to entering Winterfell was jarring. The Three-Eyed Raven completely took over his personality out of nowhere, although Meera does lend some explanation. Bran died in that cave beyond the wall with Summer, although we didn’t see these effects until he arrived back home. It can also be pointed out that Bran showed emotion while hugging every sibling except Sansa. If I believed in Dan and Dave’s abilities to foreshadow I would think that actually meant something and wouldn’t just chalk it up to bad writing.

Don’t get me wrong, I love this show. I just can’t ignore poor plot points and characterization that apparently changes each episode.

I would like to touch on Sam Tarly and the beginning of dissent in Jon towards Daenerys. Samwell is Jon’s best friend, and Jon’s new woman murdered House Tarly. On top of that, the man formerly known as King in da Norf finds out House Glover has betrayed them and that he’s been banging his Aunt. While I enjoy consequences for his stupid actions, I hate that the others have to suffer because of it. Sansa rightfully pointed out that she does not have enough resources to feed these massive armies, and had Dany not burned those supplies on the Field of Fire last season she could have brought those along to Winterfell.

All of this poor planning is going to bite Jon Snow in the ass, and may result in Arya turning against him. I would like to see Dany’s reaction to this news. I’m sure she doesn’t mind that they are related, after all she was supposed to wed Viserys. Had Viserys been born a girl, he would have wed Rhaegar. The Targaryen’s love keeping it in the family, but Dany does not want a challenge of authority. Rightfully so, despite Sam painting her out to be a heartless villain who would not give up her crown to save the realm.

Jon’s “selflessness” has gotten him killed once, and almost again during the Battle of the Bastards. Jon is reckless and blinded by the same honor that got Ned killed. This was not the excellent argument I’m sure Samwell thought it was. Regents need to be selfish in order to preserve what they already have.

Sacrifices must be made, sure – but when the costs are weighed and correct. If little Lyanna Mormont told Jon she needed to pick an apple he would take off his crown, use it as a lasso, and hand the fruit to her. If Dany were presented the same situation, she would strategize for her subjects to work together and secure all the fruit on the tree. Bad analogy aside, Jon lacks the foresight and tactic necessary for leadership.

That is what got him killed.

No one doubts his love of the people or the passion for his causes, but Jon is so laser-focused on singular goals that he forgets the rest of the world exists. He assumes his honor weighs the same as everyone else’s, and that they will see his point of view naturally.

Sansa tried to tell Jon that the North would not wait for him to return, and they did not.  Even after returning back to Winterfell, Jon fails to see the error of his ways. When Arya points out that Sansa is smart, he laughs it off. Tyrion points out Sansa’s intelligence as well, to which she tells Tyrion that she used to think highly of him.

The power dynamics have changed, the students have become the masters. Jon fails to realize this, he fails to adapt and that is why he does not deserve the Iron Throne.

This was a great first episode back, and I would love to see Bran’s reaction to seeing Jaime again. Well, let’s be honest, he probably has no reaction…but the King Slayer will! It should be glorious.

What was your favorite moment of the episode? Do you think Bronn will kill the Lannister Brothers? In your opinion, where does Jon really stand in Westerosi politics? Leave your thoughts in the comment section below, I’d love to hear from you! Also be sure to bookmark this page and return next Sunday for another Game of Thrones Season 8 episode review!

This World is a Shadow of the Real One.