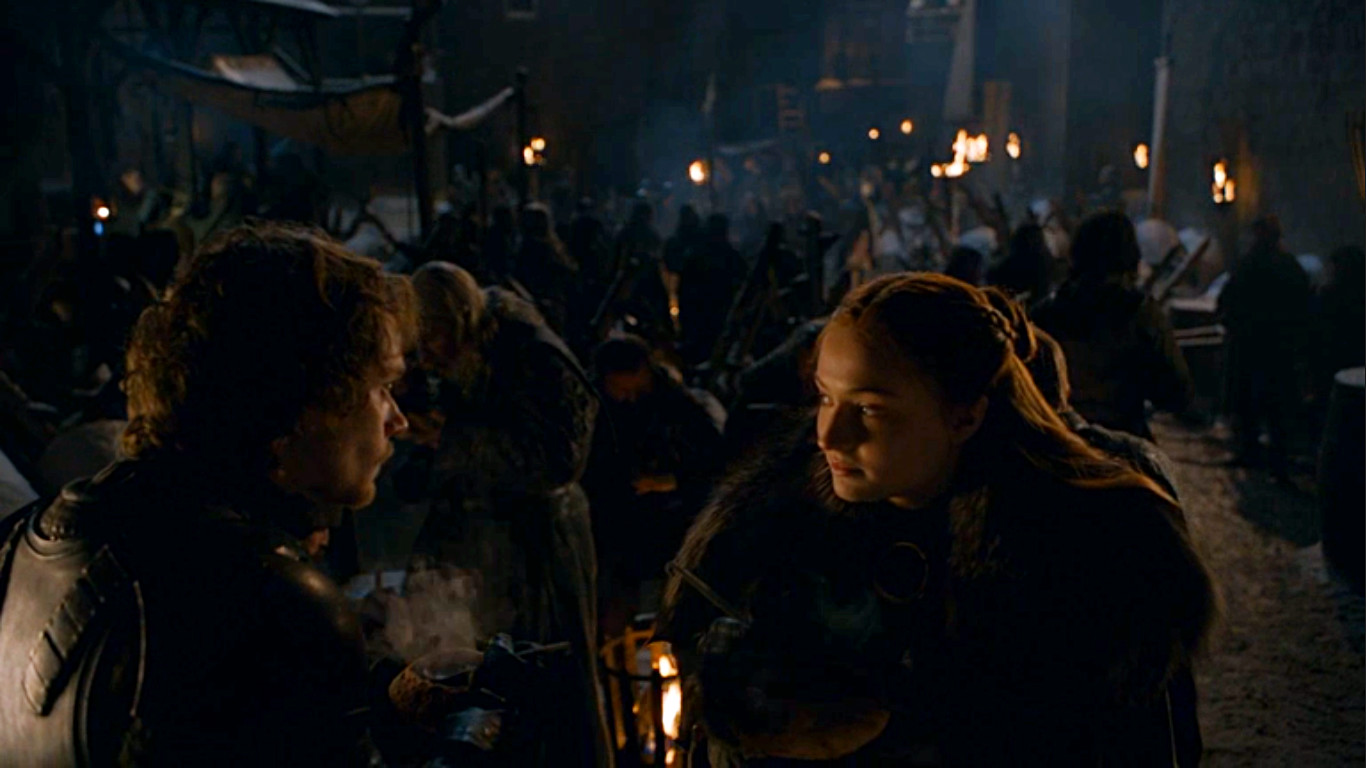 If you haven’t already, be sure to read last week’s review of Game of Thrones Season 8 Episode 1 here.

Wow, there was so much to unpack concerning this episode. I truly wasn’t even sure where to start, because after the credits when the Jenny of Oldstones song began to play it hit me – this really might be it. If George RR Martin is not able to finish the A Song of Ice and Fire series in his lifetime, and Dan & Dave have his outline for certain character’s endgame…this really was our last night with everyone.

These characters have grown on me. Sure, I may have hated some of them in the beginning, or despised their past choices but I actually don’t want anyone to die. And the episode was so…happy? In a bittersweet way. I remember reading that GRRM wanted the ending to be bittersweet, that is if he hadn’t decided to murder everyone in a fit of anti-war rage. We got the closure of a plethora of storylines that we had been following since season one, Bran and Jaime being in the forefront.

The way Bran spoke, it seems he has come to terms fully with his identity as the Three-Eyed Raven. He has really internalized the cause and effect of this world, his universe of Westeros. If he hadn’t been pushed, he never would have gone beyond the wall to become the powerful greenseer he is today. Ser Jaime would have remained a self-absorbed twat, pretending not to be in love with an absolute monster and allowing himself to be continually manipulated.  So in a way, it was necessary for this outcome, this timeline he resides in. In the same sick way Hodor had to have his mind warped.

I really liked Arya this episode. Her conversation with the Hound brought a miniscule, but powerful closure. The Hound seemed uncomfortable that she was quiet, remarking that before she did nothing but yap her mouth. Arya simply stated that she had changed. I think had Beric Dondarrion not come to tell us all about his lord and savior R’hllor the conversation would have continued. But Arya realized that things have changed, and the past is the past. She called the Hound (and Dondarrion) pathetic old men before leaving. So, it’s safe to say they are no longer on her list.

Arya then went to practice with her bow, and Gendry is standing in the doorway like a creep. He gives her the new weapon, a dragonglass staff with a retractable feature. She then leads the conversation in a direction we all knew it was heading and even so…I closed my eyes during that sex scene. Maisie Williams is 22 years old but Arya Stark is still just a little kid to me. Be damned even if she has been aged up to 18 years old in Season 8…it was just weird. It doesn’t help that Joe Dempsie (Gendry) looks so much older than her, despite their characters only sharing a five year difference in the books.

Moving on to Sansa, I believe we’ve yet to see her interactions with the Hound. He was in love with her in the books…in the show he came off as simply a creep. I wonder why they haven’t had any scenes together? I saw on twitter a lot of people have suddenly jumped on team Sansa Stark while I’ve been calling her my Queen in the North since season 1. It’s okay though, Sansa is a great character who truly cares about the North. And she also may care about Theon…who still has no cock.

Just as Greyworm and Missandei made plans to return to her homeland of Naath, I believe Theon will stay with Sansa if he survives the last battle. Their interactions were incredibly raw despite their lack of dialogue. It was also hilarious seeing Dany speechless that Theon didn’t come back for her, but out of loyalty to Sansa.

I want Sansa to be happy, but she does not need another broken man. Tyrion was clever, sure – but he was broken. He drank out of heartbreak for Tysha, wondering where whores go. He killed Shae and then his father soon after, and in the books he goes down a very dark route. He is a smart man, but he is lonely and still searching for his place in the world. Joffrey was a monster, Ramsay was psychotic and Littlefinger used Sansa as a proxy for her dead mother, Catelyn.  I would hope she could find someone without such extreme baggage as Theon (who doesn’t know whether he’s coming or going some days) but they did both live through and survive Ramsay Bolton’s torment. In that sense, I can understand that bond blossoming into something more.

Does anyone else wonder where Sweet Robin Arryn of the Vale is, and how he’s doing? Sickly and alone in the Eyrie while his cousin has his troops in Winterfell to fight a literal horde of death and prevent the long night once more? No one else? Just me? Okay.

Oh before I forget, we got Ghost! All of seven seconds…in the background…unacknowledged, just chilling. So, he’s still alive I guess.

Just as Ghost has been neglected and left off screen for us to assume he is fine, I feel like that is an analogy for the Jon-Dany relationship. Emilia Clarke and Kit Harington have zero chemistry between them. As such, their characters have none as well and the relationship came out of left field. They met, suddenly fell in love while she was holding him hostage in her ancestral home and then went dragon riding together amidst some extremely cringy dialogue.

So it was no surprise to me that she was (rightfully) pissed that Jon inherited all of his Northern genes in relation to timing and honesty. The rest of the motley crew was living their last moments, reflecting on how they got there and the battles they survived. Drinking, fucking, singing…and Jon decides to get his newfound identity secret off his chest. I’m not upset he told her, but honestly he has the absolute worst timing.

Dany suddenly is no longer in love because she realized that there is a new obstacle besides Cersei in her way to the Iron Throne. I actually laughed out loud that she didn’t care they were related, only that he was the last male Targaryen alive and therefore, had a stronger claim than her. From her perspective, this is the ultimate betrayal.

She lived in poverty on the streets of a strange land with her brother Viserys hearing stories of her family and their gallant brother, Rhaegar. Dany watched as Viserys slowly descended into madness after selling their mother’s crown for food, began to resent and abuse her, sold her to a Dothraki warlord, and then Dany was forced to murder her brother. She found new supporters, heard stories from Barristan Selmy of how Rhaegar was a melancholy book nerd who sang and made girls weep before reading a prophecy and deciding to take up a sword. She hatches the first dragons seen in centuries, becomes a queen in her own right and finally returns to Westeros.

Due to some bad council, she is left at a disadvantage but still has hope to sit on (what she views as her birthright) – the Iron Throne. She meets a man she kind of likes and after losing one of her dragon children remains committed to helping him and then taking back her realm only to find out that he’s her older brother’s son and has the better claim. The older brother she idolized who became a god figure in her mind screwed her over, and she was screwing his son.

So she is back where she started, forced to kneel to an incompetent man simply because she was born a woman.

It’s got to be quite the mind-trip.

As I said in last week’s episode review, I don’t care much for Show Dany but I adore Book Dany. And it has been quite painful watching Show Dany struggle. Almost as painful as watching Jorah “in love” with Daenerys while softly whispering “Khaleesi” under bated breaths.

I wonder if Jon Snow- er, Aegon Targaryen (the third?) will end up relinquishing the Iron Throne to his aunt. Unless his aunt organizes her nephew to have an “accident” on the battlefield to get him out of the way.

I do know, that the Jenny of Oldstones song holds weight in Jon and Dany’s fate. If memory serves right, the Ghost of High Heart requests the song as payment from the Brotherhood without Banners during Arya’s Riverlands arc. It is based on the wife of Duncan Targaryen, who married the common woman and relinquished his crown to do it. Jon enjoys giving up crowns, as he gave up the North with ease so it could be foreshadowing.

The last scene I would like to talk about is the knighting of Ser Brienne of Tarth. It had been a long time coming for Brienne, especially after the devastation of losing Renly and being blamed for his death. She had been in his Kingsguard, serving and protecting the man she loved. Brienne then protects Jaime and is knighted by a man she may indeed be very much in love with. She will never admit it, and neither would Jaime but they have something. The timing of Tyrion and Jaime speaking on the battlements and Jaime leaving to look at Brienne down below while Tyrion talks of killing Cersei was absolutely intentional. Jaime may not go back to Cersei, and for that I am glad. Cersei was probably sipping wine enjoying the sun in Kings Landing while everyone else is freezing their butts off in Winterfell. I guess the cold from the dead cancels out the natural hot springs underneath the castle.

This had to be my second favorite Jaime-Brienne scene. The first being in the Riverlands at the Tully Castle when they waved goodbye to each other, thinking they would never meet again.

I enjoyed this episode, despite how long it felt at times. I kept checking the timer and being surprised at its pacing. Next week is the big battle we’ve all been waiting for, and apparently the longest of the short season. I look forward to it wholeheartedly.

Before I end this review, can we all just appreciate Podrick Payne and his existence? Not only is Pod a sex god, but he’s got the voice of an angel! And I appreciate that the writers threw in Tormund’s origin story of how he got his name. I remember cracking up when I read that explanation scene in the books, and it was great seeing it come to life in the show.

What do you think the Jenny of Oldstones song foreshadows? Will Tyrion kill Cersei and fulfil the valonqar prophecy? How do you feel about the emerging relationships of the show? Do you think (Arya x Gendry) (Brienne x Jaime) (Sansa x Theon) could last?

Leave your thoughts in the comment section below, I’d love to hear from you! Also be sure to bookmark this page and come back next Sunday for another Game of Thrones Season 8 Episode recap and review!