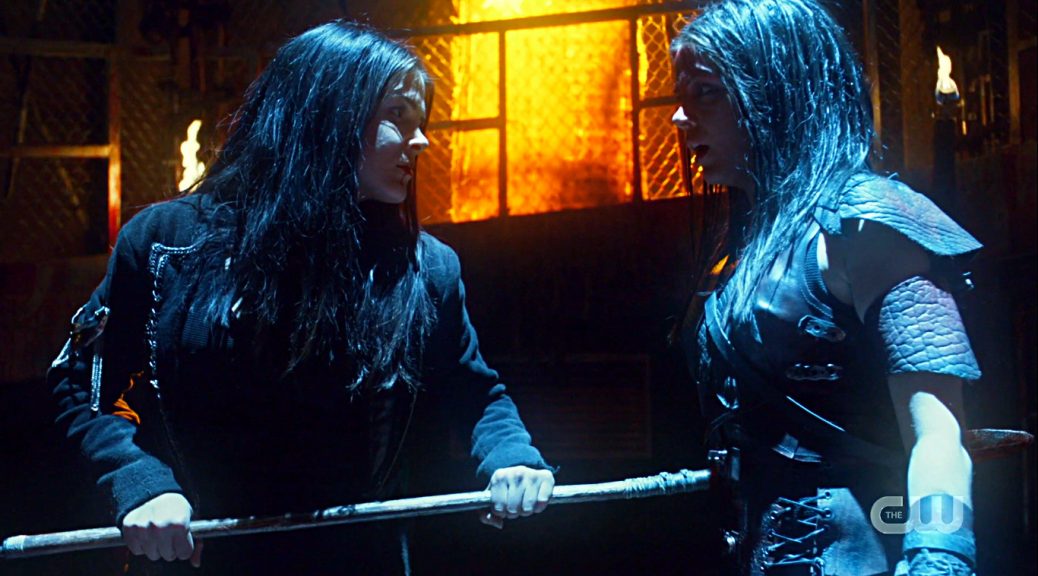 Hello Everyone! I’ve been gone for a while but now I am back to reviewing The 100 each week, despite it almost being over! Weirdly enough, I have been watching each episode and do have a few reviews already written, but didn’t want to post them sporadically. So instead, I am thinking about starting with tonight’s current episode 10 and working my way back from there.

It will be interesting to see how much of the story I missed or could not foresee, in addition to any actual over the top foreshadowing I missed. While I’ve been gone, I also heard that in addition to the show being renewed for a seventh season, Bob Morley and Eliza Taylor actually got married! I literally had no clue the two actors were even dating.

Here I am, always (subconsciously) talking smack about Bellarke and it is endgame in real life and in the books. Only the show has decided to do a 200+ year slow burn where at this point the characters relationships are too complicated to categorize correctly.

Similar to how Josephine pointed that out before Clarke Griffin got her body back this episode!

(Did you all enjoy that transition? Haha)

I am glad that Clarke is back, and she came back as Wanheda to kill multiple fools, steal a dirt bike, and escape towards where Gabriel and Octavia are stationed. I don’t have much to say about her journey there, and judging by the next episode summary it seems the Blake siblings are finally reunited.

Octavia finally wants to do better from the bottom of her heart, and I would love to see Bellamy apologize for leaving his little sister on an alien planet alone by herself with a murderous prime-killing cult running about. I mean seriously, that was super uncool – I don’t care how upset you are with her she could have died.

Then again, Bellamy frequently says his innocent little sister died in that bunker. Which is true, she did die. But now Blodreina is also dead, after a pep talk from Pike who in her subconscious somehow turned into a proxy for Lincoln? All the while she is traveling with Gabriel, who in my head I’ve been calling a discount Lincoln since the beginning before the reveal.

So we’ve seen Monty, and Pike thus far. I keep hoping in vain we will get a new Lexa cameo, but given the show’s past of trying to erase her impact on the fandom I am probably dreaming.

Either way, Octavia is back bitches! She wants forgiveness and absolution for the sins of her past. Which although this is the theme of the season, no one has actively worked very hard towards this except Clarke for the most part. And in her penance, she died.

As did Octavia this episode, even if it was a symbolic death of a persona that encapsulated her entire being for two seasons now.

I was also under the impression that Octavia and Niylah would begin a sort of…relationship. At least judging from the trailers that was my belief. She finally got some screen time this episode, so maybe things could still develop before the season ends.

I loved that Kane chose death, and I don’t know why Abby even thought he would be cool with body-snatching another human being. Especially when Kane has a god-complex and believes he is the savior and bridge between worlds.

Abby and Raven seem to have a lot of scenes together, although I could understand Raven not wanting to go back to the ground after Shaw needlessly died.

I do wish they had told Abby about Clarke’s death, as she would not have helped Sanctum make the nightblood mixture. The show seems to be going this strange route where Raven is now a proxy daughter instead of Clarke. Since the time skip and Clarke’s adoption of Madi, Abby has been completely hands off concerning her daughter.

Now all we see are teary-eyed, pained exchanges between Abby and Raven where Raven alludes to her mother’s dependence problems, and Abby looks off into the distance while cognitively disassociating.

It is kind of boring, to be quite honest. I enjoy the depth, the characters are well-written and I believe these conversations would be happening – but does Raven Reyes always have to suffer? Why can’t she just be happy.

Either way, I am glad that Kane is (finally, and completely) dead and Indra is back. Marcus Kane actually went and floated himself, the absolute madman!

Do you think we will get Gaia’s whereabouts in the next episode? What do you think about the whole Clarke/Josephine situation? What will become of Simone on Eligius IV when everyone realizes Sanctum is on lockdown?

Leave your thoughts in the comment section below, I’d love to hear from you! Also be sure to bookmark this page and come back next Tuesday for more The 100 Season 6 Recaps and Reviews!

2 thoughts on “The Rebirth of Octavia Blake”