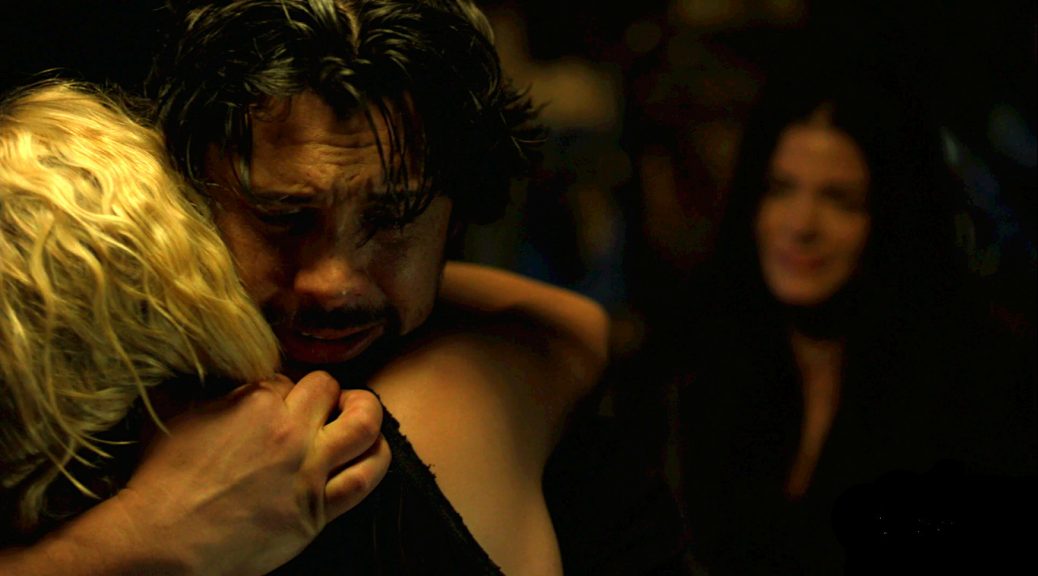 Whew, Clarke Griffin is back, baby!

The flame can do some pretty wild things. It can retain consciousness, enhance abilities, and in the case of Madi and Sheidheda – even isolate.

Madi’s purpose as a commander has been put into question more than once this season. I’m glad there is an actual solution to their Dark Commander problem that doesn’t involve killing the poor girl. I like the kid, just not when she’s being influenced by a deadly, Voldemort-esque older creep.

Speaking of creeps…is Russell really planning on uploading his wife’s consciousness into Madi? Not only is she a child, she is another unwilling host. Pedophilia, cult leader, and murderer. Russell is truly batting a thousand.

There is still radio silence on Jordan Green’s fate after that near-fatal stab wound. I understand his infatuation with Delilah (after all, he’s never really had a crush before) but what he did was stupid. What Madi did was even worse, but again – Sheidheda’s control.

I was pleasantly surprised that one of Sanctum’s own killed Simone. I never trusted Ryker to begin with, he’s way too conflicted, but honestly what did he expect would happen? These people had just learned that their entire way of life has been a lie. They were brainwashed from birth to worship a bunch of body-stealing eugenics enthusiasts and offered up their offspring to a false cause.

I would be angry too.

That type of anger is unpredictable to those of Sanctum, but not to those still constantly fighting wars. So of course, Echo the spy predicted that there would be violence. It just wasn’t the right kind of violence that the space gang could have used, however.

In the preview for next week’s episode, Ryker seems to be getting his just deserts and I am here for it. I wish they would let slip that he is the reason Gabriel got away, maybe that would be what would break Sanctum’s false illusion over the people.

Speaking of which, I don’t understand how Gabriel’s first body was dying of cancer. I thought the Lightbourne’s if not the entire first society were eugenic enthusiasts. They weren’t successful in transfusing nightblood into bone marrow, but surely they would have figured out a way to filter out disease from the body, right?

Unless, Gabriel made himself sick as a form of protest in the new body…because how else would everyone accept their immortal gods dying of a very mortal cancer?

In the Josephine flashback, while she is trying to decide which memories to let go, we see that Gab’s reaction was similar to Kane’s. He didn’t think it was right to take a new body, and seemingly had the same adverse reactions to being intimate with Josephine as Kane did to Abby.

Even if the spirit is the same, the physical sensations would never be. It must have been a disturbing moment of clarity, to realize that you can live forever and have no agency over your death. No matter how much you protest, another would bring you back out of love. And thus, the cycle continued.

I am really proud of Gabriel for doing the right thing and returning Josephine back to her mind drive, even if she was sneaky and tried to destroy Clarke’s consciousness first. Bellamy’s faith and love is what brought Clarke back, and caused her to keep fighting.

If we’re honest, I completely thought the two would make out after that. The way she looked at him gave me more than friendship vibes. Hopefully, the two realize that they are in love with each other. I’m sure Octavia is tired of looking on at the pair while they continue to not realize their feelings for one another.

Either way, all is well that ends well.

I mean, we still have no clue what happened to Diyoza. Or what Space fam’s plan is to stop Russell. Or how the people of Sanctum feel about them. Or if Raven can reset Madi’s flame to bring back the other commanders’ influence. Or what Murphy will do to atone for his sins. Only three episodes left, but I’m sure the story will be tied up nicely.

Do you think Gaia will succeed in retrieving Becca’s notebook? What did Gabriel mean by “death is life”? What will change now that Clarke is back and fully alive?

Leave your thoughts in the comment section below, I’d love to hear from you! Also be sure to bookmark this page and come back next Tuesday for more The 100 Season 6 Recaps and Reviews!

Thank you all for reading this, and I’ll see you in the next one!