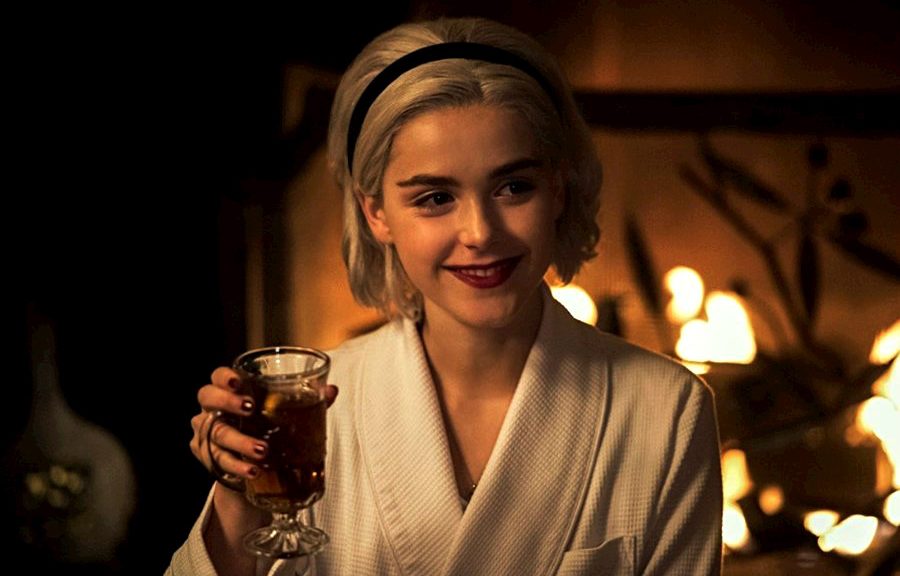 This has literally been sitting in a computer folder since February. That’s almost a complete year. The original intended essay is somewhere in a book I can’t currently locate, from even further along.

I’ve been meaning to continually update this website more, but things kept coming up. But that won’t be an excuse. I need to finish The 100 re-watch, maybe once I get Netflix back in December.

Anyway, I’m shooting for posts at least twice a month for this website. On top of any reviews I eventually pick up. Let’s start with The Chilling Adventures of Sabrina, which I meant to release this Halloween but alas, distractions.

Note: This was written just before the release of season 2.

Sabrina Spellman is a witch; a mortal one. She was promised to the dark lord at birth due to a generational bloodline of servitude. Unbeknownst to her father Edward, Sabrina’s mortal mother Diana had her baptized with her Aunt Hilda as witness.

Both of Sabrina’s aunts are akin to the cartoonish portrayals of good and evil on the young woman’s shoulder. Aunt Zelda is completely devoted to the dark lord, while it is hinted that Aunt Hilda was pushed into this lifestyle. Hilda often struggles greatly with devotion in her heart versus her perceived duty and tasks.

Sabrina’s cousin, Ambrose, is (presumably) black and white. Which is a duality the High Priest Father Blackwood wished to have in his children. Prudence is one such duality, and the twins are another. Ambrose is a confirmed pansexual who is on house arrest during the first series.

Upon the restrictions lifted, he is allowed back into the world. Entering this ‘New World’ after centuries of home confinement with memories of the old world could be interpreted as duality.

Dualism is a doctrine that believes our world is made up of opposing forces that account for our collective realities. In this interpretation, there is a homeostasis in the union of the forces. Bringing the best of each to this marriage in what I refer to as duality. These factors are also in the concepts of the Hegelian dialectic and the “As above so below” theology. But for now, let’s focus on Sabrina.

Before selling her soul to the devil, Sabrina was raised as a mortal with witchy training and customs. Sabrina’s mortal and magical duality has allowed her to dwell in places one who is not of her birth could not. An example of this is when she ventures to the Otherworld (limbo) to find Harvey’s brother’s soul and contact her mother’s spirit.

Or as a lesser example, the ability to attend mortal and witch schools. Sabrina’s ability and permittance to form friendships with mortals who have no clue concerning her secrets.

Sabrina begins dating Harvey Kinkle, whose family historically hunted witches – giving them ownership of the mines. Sabrina and Harvey’s relationship could be considered a duality in the lesser vein of her parent’s courtship.

Except, Diana was a willing participant. Harvey is not. This should spell (ha – see what I did there?) trouble for our protagonist as I can see him slipping to his father about Sabrina’s true nature. This could cause the Kinkle clan to engage in their witch-hunting activities.

Let’s move on to the friends: Rosaline Walker and Susie Putnam.

Generations ago, the women of the Walker family were cursed with a clairvoyant gift called “the cunning”. After a certain age, select women go blind but their sight into the unknown is enhanced – a tradeoff of sorts that is balanced in a universal harmonic perspective.

Seeing into two worlds, Roz is instrumental in helping Sabrina on her erroneous whims, and rescuing Susie from Krampus during the Winter Solstice Special. Roz is also the first one to confirm to the audience that Sabrina is indeed “dead” after pledging alliance to the dark lord. I am referring to the vision of her friend wandering in purgatory with the resemblance of a corpse. Sabrina’s corpse also had a noose around its neck, but I’m not sure if this was just because she was ‘bound’ to the Witching Tree.

Susie Putnam is a transgender, which is sacred to those who follow the Baphomet. Although I type this name out, I am a firm believer that what you put out into the universe is attracted back to you. In this vein, I would just like to write that I have no interest in any of that nonsense or the entities associated with it.

If you are unsure of what I am referring to, the “ “ is the creature depicted in the Academy. This is based on a real statue whose (alleged) portrayal has upset, unironically, a satanic temple based in Salem, Massachusetts. I have to wonder how the temple feels about The Chilling Adventures of Sabrina’s nod to the infamous Salem witch trials and their descendants today in the fictional Greendale.

Despite my own reservations, I really enjoy watching this show. I adore the easter egg that Riverdale is only in the canon universe’s next town over.

When do you think The Chilling Adventures of Sabrina season 3 will premiere? Will Sabrina ever save her boyfriend Nicholas Scratch? Have you checked out the comic series associated with this adaptation?

Sound off in the comment section below, I’d love to hear from you! Also be sure to sign up for our newsletter to stay up to date with series reviews, news, and ongoing events.