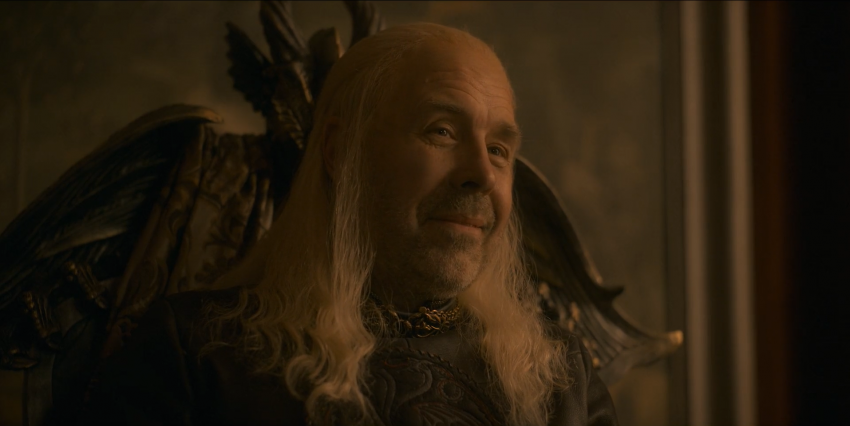 This past Sunday, House of the Dragon brought us yet another delightful episode to watch.

I have to admit, I found myself endeared by the steady quality of writing and set design in this show. I won’t count our chickens too soon, but so far at the very least – I am pleased with this show.

I pointed this out in episode one, but there were illustrious pleasure-making tapestries hung above Queen Aemma’s bed as she gave birth.

At first, I thought it was just a stylistic choice given her analogy of women’s battlefield being the birthing bed juxtaposed to the Tourney happening outdoors, but I believe there may be something more to them.

In episode two, Princess Rhaenyra has a verbal spat with her cousin Princess Rhaenys – the “Queen Who Never Was”. While Rhaenys tries to let Rhaenyra know that her naming as heir is uncertain if her father remarries or dies, there was a pleasure-making tapestry behind her seat.

Although the fresco was quite big, in the camera’s framing you can just make out one naked woman with a snake between her legs – a nod to Princess Rhaenys’ husband, the ‘ Sea Snake’ of Driftmark.

Alicent Hightower also has a pleasure making fresco dedicated to her, as seen during the interactions with her Lord Hand father.

In Alicent’s fresco, however, there are three men.

A woman is being taken by one man, while a man takes another male on the other side within frame. I do have to wonder if this is a nod to the rumors surrounding young Alicent Hightower’s relationship with the late King Jaehaerys I Targaryen, who died in bed at age 69 with Alicent by his side.

Maybe the other two men could be Viserys, who is unknowingly being figuratively ‘f-ed’ by his Hand, Lord Otto Hightower.

I wonder what other tapestries the show will display for us going forward.

King Viserys I Kills A Stag

King Viserys is a weak king. I’m pretty sure I will mention this in each week’s review so long shall it remain, or unless the King is dead.

Aside from forcing Princess Rhaenyra along on the Hunt in honor of Viserys’ firstborn son’s (and presumed heir) 2nd name day festivities, he conducted himself poorly in regards to social behavior. From openly arguing with his daughter for all the accompanying nobles to see, to bristling relations with Lord Jason Lannister – the King was overall having a bad day.

So when news that an auspicious white stag was spotted on young Aegon’s name day, of course, this raised his spirits. During the night, Princess Rhaenyra runs off into the woods with her named Kingsguard member Ser Criston Cole at her heels.

Throughout the episode, I kept thinking maybe Princess Rhaenyra would instead try and hunt the fabled white stag out of spite for her father, but thankfully that didn’t happen. What did happen though, was (another) embarrassing public display of Viserys’ weakness.

Why is King Viserys Losing Fingers?

Aside from needing a step-stool to unmount his horse, Viserys also could not cleanly kill an ordinary stag subdued by the horns for his kingly benefit. I know the king is missing a few fingers, but that doesn’t mean he has to present such weakness.

Aegon the Conqueror built the Iron Throne to be purposefully uncomfortable, and dangerous for a King who thought they could take it easy. Thus, King Viserys I constantly cutting himself on the throne is a sign of weak rulership. Although Viserys apparently now suffers from a flesh-eating infection due to scrapes from the throne, I also think the loss of his two fingers could be symbolic, as well.

The King has been politically isolated and lost his two biggest supporters: his brother Prince Daemon Targaryen, and his fellow Valyrian Lord Corlys Velaryon.

I don’t have much to say about Princess Rhaenyra this week other than to express my pain over the current situation she finds herself in. I would think the Princess running into the fabled white stag said to be a mark of rulership would be an auspicious symbol of her right to rule Westeros, at the very least.

It was pretty funny seeing Rhaenyra brush off Lord Jason Lannister. Man, I don’t know if the directors told the actor to play up the ‘Lannister arrogance’ but wow, if Jason wasn’t a mix of Jaime’s arrogance and Tyrion’s (former) wit on screen, then I don’t know what is.

Although extremely reckless, Daemon putting himself on the frontlines in agreeance with Corlys’ brother’s recommendation was a great last-ditch strategy to turn the tide of the three-year-long war. And while I don’t really agree with taking it out on the messenger, I can understand the prince’s frustration.

The Prince and Lord Corlys have been fighting this war alone for three years without the crown’s help.

Meanwhile, King Viserys has done nothing of note except bed his wife and throw countless extravagant parties while the realm suffers. After Lord of Harrenhal and Master of Laws Lyonel Strong gives the king much need sound advice on a proposed union between Princess Rhaenyra and Heir to Driftmark in Lord Corlys’ son Laenor, only then does Viserys remember the two former allies are alive.

I swear, while Daemon narrated Viserys condescending letter I heard the music from Mario 64 when Peach invited Mario to the castle for cake. It was an insulting letter to hear, and I’m not even in the show!

Against the burning embers of a massive fire, Viserys tells his Lady wife Alicent about his dragon dream.

In it, he dreamt that a son from his line would wear Aegon the Conqueror’s crown. Well, going into spoiler territory from the Fire & Blood series, Alicent and Viserys’ son Aegon II is actually coronated with his namesakes crown, and by the treachery of his older half-sister, Rhaenyra’s appointed knight Ser Criston Cole himself, nonetheless.

Considering Ser Criston being present with Rhaenyra in the woods where they both experienced the auspicious omen of the white stag, this will certainly be a slap in the face later on if the show decides to closely follow the books.

Given that we at least know this about Aegon II’s later coronation, I would also like to consider Ser Criston’s failure to protect Princess Rhaenyra from the boar foreshadowing, as well.

Just after Rhaenyra had talked herself out of believing that her new baby brother would usurp her crown, a boar charges out from the dark of the woods and tries to kill only her? Not to mention, once it is stabbed by Ser Criston, it gets up in a second wind and forces Rhaenyra to kill it herself?

I have to wonder if like in the A Song of Ice and Fire book series, there is a conspiracy against Targaryen Rule. Are House Targaryen’s enemies sending their monarchs dreams which they knew would be pursued, as their house gained notoriety and profit from their own ancestor Daenys the Dreamer and her prophecy of Old Valyria’s Doom?

It is said that the Faceless Men were responsible for the Doom of Valyria, as they made up a stock of disgruntled Valyrian empire slaves who gave ‘comfort’ to those brethren who should have long passed while working in the mines.

Given the small council’s use of crystal orbs of some kind to protect from glass candles or scything of unwanted magical eyes, I wonder just how deep the influence of dreams and perceived omens go in regards to the Targaryen family?

But, I’d love to know your thoughts and theories surrounding the Targaryen family in the comment section below!