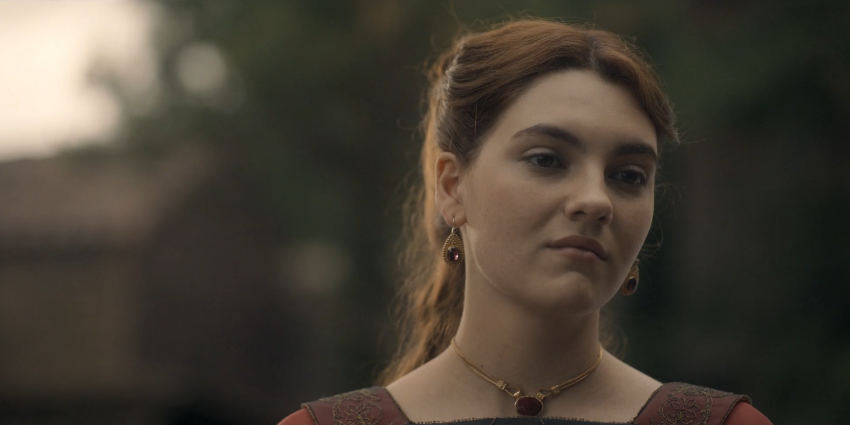 It has taken me a while to process and fully digest all that happened in this episode.

We have a lot to talk about, so let’s start with Alicent Hightower and Rhaenyra Targaryen.

I know it is not in a dragon’s nature to be told what to do, but I don’t think Rhaenyra should have ended her courtship tour early. Sure, she sailed back in time to see Daemon return to court after the battle in the Stepstones with the Triarchy, but her potential betrothal was far more important.

It wasn’t mentioned, but I believe Rhaenyra was at Storms End.

Her (distant) relative Borros Baratheon, Lord of Storm’s End and ancestor to Stannis, Renly, and Bobby B was hosting the proceedings. While it was kind of sad that only old men and green boys came out to bid for her hand, I think the Blackwood boy could have been a serious contender had he been of age.

Why Was Alicent So Upset With Rhaenyra?

Queen Alicent is angry at Rhaenyra because she feels betrayed due to the rumors of Rhaenyra sleeping with her Uncle, Daemon. There may also be hints of jealousy.

“How romantic it must be to be imprisoned in a castle and made to squeeze out heirs.”

When sitting by the Weirwood tree at the party, Rhaenyra makes a comment that marriage is like a prison to women. In this episode, we see Alicent’s miserable and isolated life as the Queen. All Alicent’s life consists of is ‘pleasing the king’ and popping out heirs every two years.

The fact that Rhaenyra was allowed by her father a three-month betrothal tour to find a husband of her choosing across the six kingdoms is far more than Alicent ever received from her father, Otto.

How Trustworthy is Otto’s Advice?

Otto and his Maesters dissuade Viserys from making an advantageous marriage alliance with House Velaryon. Now in this episode, Otto laments that the ‘old sea snake’ may be wedding his daughter, Laena, to the Sealord of Braavos.

Exactly how trustworthy is the advice Otto offers the king?

Otto refused to name his source while spying on Rhaenyra and Daemon at the brothel (which was Mysaria, by the way) so who is to say Otto isn’t just making it up as he goes along?

‘Only the Blood of the Dragon will know the Red Keep’s secret passages and tunnels.’

I am paraphrasing, but I remember it being mentioned by a certain monarch after the tunnels were built in the Red Keep. In Game of Thrones, the only person who had a working knowledge of the tunnels was Varys, who was believed to be a secret Targaryen; his heritage being speculated on why he was castrated at a young age, and why he keeps a shaved head.

Why Did Daemon Leave Rhaenyra in the Brothel?

HBO’s ‘Inside the Episode’ reveals that Daemon leaves Rhaenyra due to his own impotence.

According to showrunner Miguel Sapochnik, Daemon is using Rhaenyra as a political pawn to get back at Viserys, and his ‘impotence’ is due to his conflicted emotions about the princess in that moment.  According to the episode director Clare Kilner, Daemon leaves Rhaenyra because he was “not in charge or in control” of the situation.

Both parties expressed that Daemon was extremely predatory in his actions and intentions with Rhaenyra.

In my own opinion, as many others who watched online have stated – the scene read like Daemon realized what he was doing, and through his own conscious made the split-second decision not to sleep with Rhaenyra.

While it may have been Daemon’s prerogative the entire time to bring Rhaenyra – a Targaryen Princess with notable silver-blonde hair – to a brothel in Flea Bottom for all to see in order to ruin her marriage prospects and reputation, I would still like to at least believe that Daemon Targaryen still has a shred of dignity; and felt remorse for his unscrupulous actions.

To be honest, I don’t think anybody was surprised that Rhaenyra chose to sleep with Ser Criston Cole.

It has been abundantly clear that Rhaenyra has had a crush on Ser Criston since the Tourney held in honor of her brother, Baelon. He is her sworn night, and the two shared a special moment in the woods during the hunt in Aegon’s honor. I do kind of feel bad for Ser Criston breaking his sworn Kingsguard Oath of Chastity, as it seemingly weighed heavy on him.

Not getting too far into spoiler territory, but I’ve heard that Criston ends up betraying Rhaenyra’s trust, and I have to wonder that if she did not sleep with him, would Ser Criston have remained loyal to Rhaenyra in the end?

Before firing his Hand Otto, the King mentions how his father Baelon the Brave died. During a hunt held in his honor by King Jaehaerys, Viserys’ father mysteriously died of ‘a burst belly’.

While this in itself is strange, when added with the context of Otto Hightower suddenly becoming Hand of the King, and bringing his young daughter Alicent to court while growing closer to King Jaehaerys and then his grandson Viserys who she later marries – it all seems very calculated.

To go one step further, the Hightower seat of power is near Old Town, where the Maester’s Citadel resides.

Grand Maester Mellos brings Princess Rhaenyra moon tea at the end of the episode, telling her it will rid her of ‘unwanted consequences’ when brewed correctly.

I’m not sure Viserys would order the maester to bring his daughter moon tea, especially when he was busy firing Otto. Also, moon tea happens to be extremely dangerous if brewed incorrectly – we see the madness it brought Lysa Arryn in Game of Thrones.

While on her tryst with Daemon in the slums of King’s Landing, an old blind fortune teller asks Princess Rhaenyra:

“Do you wish to know your death, child?”

Before Rhaenyra can answer, a dragon statue shoots fire out of its mouth. I won’t get into Fire & Blood book spoilers, but that scene will eventually be important somewhere down the line.

Either way, I think I’ll wrap up this review here.

Do you think King Viserys actually cared that Rhaenyra went out to enjoy herself?

Was sleeping with Ser Criston a bad move?

And…What exactly is her uncle Daemon up to?