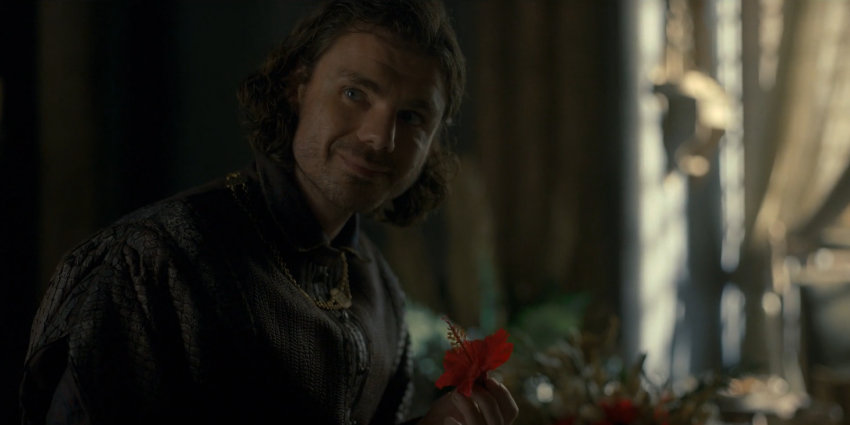 This episode was very disappointing to me, but not for reasons obvious to most viewers.

I am genuinely upset that we didn’t get more of Ser Harwin and Lady Laena, and their adjoining interactions with their Targaryen paramours Rhaenyra and Daemon.

Luckily, we did get potential confirmation that Larys Strong is indeed a greenseer!

Why Did Larys Kill Harwin?

As it stands right now, it seems Larys Strong was suffering from ‘second son syndrome’. Daemon and Corlys even bonded over their status of being regaled to inheriting nothing and standing in the shadow of their older brothers all due to the position of their birth.

Although he was never shown being mistreated, it seems Larys secretly resented his brother Ser Harwin and his father, Lyonel Strong. With Ser Harwin being a member of the Gold Cloaks and deemed ‘Breakbones’ – the strongest man in the kingdom who also fathered the Princess and Heir-apparent Rhaenyra’s children – maybe Larys was jealous of him.

Despite understanding why Larys might be inclined to usurp his older brother’s birthright, I can’t quite figure out why Larys would want his father Lyonel dead.

Under the advisement of Lyonel Strong as Hand to the King, Viserys has received sound council for over 10 years. If Larys desired a strong and safe realm, he would favor his father remaining in power and guiding Westeros from the shadows under King Viserys’ direction.

Unless…Larys somehow has a thing for Queen Alicent?

Is Larys Strong a Greenseer?

If you watched the original (now sequel) series Game of Thrones, you will know that greenseers have the ability to ‘warg’ animals and ‘see through the eyes’ of the (often bleeding) weirwood trees.

Jojen Reed and Brandon Stark were both greenseers – a prerequisite for this ability being their blood kinship to the First Men of Westeros.

Harrenhal is supposedly close to the Isle of Faces, where Larys Strong would have grown up and presumably gained or honed his latent greenseer abilities. There is a great theory video making the rounds that ties a lot of the weirdness surrounding The Red Keep to Larys coming to court, and his association with rats.

Larys being a greenseer who wargs through rats in the castle would explain and add credence to:

What was very interesting about the last point is that King Viserys was fully aware of the rat’s unnatural presence in his chambers, and seemed aware that he was being ‘spied’ on by the rodent.

Why Did Laena Burn Herself to Death?

Laena Velaryon commanded Vhagar to burn her alive so that she could die a dragonrider’s death.

Laena did not wish to die a weak woman’s death in a country foreign to her own, and chose to go out in a way she saw as befitting a woman of her status and station in life.

I’m sure the death of Queen Aemma still lingers in the minds of those within the kingdom, and I don’t think Daemon was going to make the same choice as his brother Viserys did. When the Maester told Daemon that he had ‘reached the limit of his art’ and could no longer help Laena, Daemon asked if the mother would survive, to which the healer said ‘no’.

It was subtle, but Daemon shakes his head no, as if to say ‘no, do not save the child if my wife will die’.

I don’t know if Laena missed hearing that part when she left, but regardless she would have died anyway along with the baby – so I understand and respect her choice…even if I am a bit sad we didn’t get more time with her character.

Why Does Daemon Ignore Rhaena?

It seems like Daemon cares more about upholding the strong Valyrian culture of his ancestors than whether or not he has a son, which is the primary concern of the patriarchal Andal society of Westeros.

So although it isn’t right, it makes sense that Daemon would ignore his daughter Rhaena in favor of her twin Baela.

Before Leana comes to Daemon with the discussion of returning home to Driftmark to give labor, Baela can be seen with Daemon learning High Valyrian. As Baela is the only dragonrider of his children, Daemon puts more effort into bonding and teaching the daughter he can relate to her Valyrian heritage.

HBO released a still image of Daemon hugging both of his daughters after their mother’s death and comforting them, which was apparently cut from the episode without reason. I’m not sure why the showrunners are trying to make Daemon a heartless psychopath, but I hope he gets a softer interpretation related to his character in future episodes.

And with that, I think I’ll wrap this one up here.

But, tell me your thoughts.

Do you think Daemon truly cared for Leana?

What will happen now that both Daemon and Rhaenyra’s lovers are dead?

Seriously, does Larys have a thing for Queen Alicent?