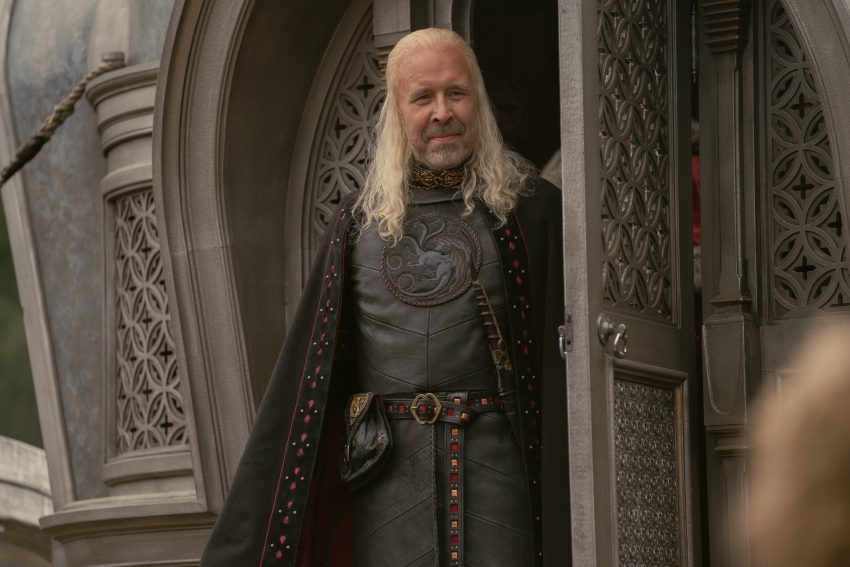 I had heard that this episode was given a 10/10 score by critics before its release to the public, and now I can see why. Paddy Considine gave the performance of a lifetime while portraying a physically weak, but mentally strong King Viserys I Targaryen.

Arguably, “The Lord of the Tides” was a masterpiece in a carefully woven tapestry of episodes concerning politics, family, loyalty, and succession of a dying Targaryen dynasty – while also being born anew.

If you read my first episode review for House of the Dragon, I was skeptical of what this series would bring to the table. After investing years of my time and energy into Game of Thrones (and by extension A Song of Ice and Fire) I along with millions of other fans were burned for committing to the lore and characters of George RR Martin’s epic fantasy series.

While I don’t want to be hasty, I can at least wholeheartedly say that House of the Dragon has exceeded any expectations I had for the show, and actor Paddy Considine deserves an Emmy for his heart-wrenching portrayal of the broken and dying King, Viserys I.

Dare I say, rather openly admit that I was in the camp of people adamantly calling Viserys weak. Especially after last week’s incident where his Queen Alicent sliced his daughter and heir apparent Rhaenyra with the Valyrian steel blade containing Aegon the Conqueror’s prophecy.

I don’t know if this would have changed our story much, but I wish Rhaenyra hadn’t stayed away from home for so long. The Targaryen heir apparent to the throne is supposed to reside on Dragonstone, but both Rhaenyra and Daemon knew Viserys needed help – and despite this left him living with a nest full of vipers.

Queen Alicent and her father Otto redecorated the Red Keep with various insignia relating to The Faith of the Seven – in deference to the ‘new gods’ when Targaryen’s traditionally celebrated the spiritual beliefs of Old Valyria.

(Is Balerion the Black Dread’s skull even still in a place of worship? I know in Cercei Lannister’s time the skull is still there as Arya Stark sees it while sneaking around the castle, and all of the Faith decoration have spread to even the throne room. Will this further ‘redecoration’ happen during the Dance with Dragons at Alicent’s command?)

Rhaenyra returns home to a welcoming cold and oddly reminiscent of King Viserys visit to Driftmark for Rhaenyra and Laenor’s betrothal. Otto latter asks the small council if the Prince and Princess were welcomed “fit according to their station” and receives the news that they were rightfully disregarded and humiliated in their own kingdom.

I mean, the audacity of Otto Hightower, the loser second son from Old Town who never should have been given power. Otto truly has lost himself, hasn’t he?

Anyway, when Alicent does come to greet Daemon and Rhaenyra there is a lingering shot of Alicent staring at Rhaenyra’s scarred arm, to which Rhaenyra quickly covers it and holds her belly. The body language alone would suggest that Rhaenyra feared for her life, and fears for her children’s life – which is why she hadn’t returned home in so long.

While I understand that, truly I do – I really do wish Rhaenyra would have forced herself (and her kids) to pop in every once or twice a year, at the very least.

Despite being on quite literally his deathbed, Viserys seems to have gathered enough strength for his last stand against the Hightower family, and his ‘true test’ as a King reigning during the Targaryen dynasty.

Rhaenyra presents her two true-born sons with Prince Daemon to Viserys, and goes to her father late at night to discuss Aegon’s prophecy told to her nearly 20 years ago.

Although there were Hightower shenanigans happening left and right, Viserys gathered the strength to stand as a dragon – entering the throne room one last time to protect his beloved daughter – his “only child” – with his sorely missed first wife, Aemma.

With the Valyrian steel dagger containing Aegon’s song, Viserys vows to cut out the tongue of Vaemond Velaryon, and any others who speak against his will.

I read an interview with one of the directors Geeta Patel who said that they purposefully framed the shot to make it look like Viserys was walking not towards the throne, but to his daughter Rhaenyra.

“…You see Viserys exerting himself and then you see he’s trying to get to the throne to help the realm. While we were rehearsing, Rhaenyra just happens to be standing there in the middle. I was like, “Oh, wait a minute. He’s not walking to the throne, he’s walking to her…”

Despite all of his faults, Viserys truly did love his family and wasn’t weak at all – he just showed a different type of strength.

A Song of Ice and Fire Prophecy

When Viserys is on his deathbed, high on Milk of the Poppy, he begins muttering to Alicent while believing she was Rhaenyra. Continuing his earlier conversation with who he thought was his daughter, Viserys reaffirms his belief in Rhaenyra’s right to rule, and that she will bring the realm together and lead their line to the Prince That Was Promised – the future baby Aegon.

Which Aegon was King Viserys Talking About?

Well, King Viserys certainly wasn’t talking about his son with Alicent – a serial rapist whose life is falling apart despite apparently having it all. If anything, it would have been better if the more dutiful son Aemond One Eye had been born sooner – although his character seems ruthless, I believe he would have got things done for the realm, and for his family.

I don’t blame Princess Rhaenys for acting coldly toward Rhaenyra. I haven’t really mentioned this in my reviews, but I actually cannot stand the incredibly selfish Laenor.

The more I think about Laenor failing to give Rhaenyra an heir, and deciding to run off to Essos with his lowborn boyfriend despite being heir to the wealthiest realm in the 6 kingdoms and having two parents already in mourning, is absolutely disgusting to me.

I mean sure, Laenor couldn’t possibly know his father Corlys would be wounded fighting in the Stepstones, but there would be no ‘succession crisis’ for the seat of the most powerful house in Westeros if Laenor had just done his duty as promised.

Then again, Rhaenyra did make the joke that their house words were “I should have been there” and it really does ring true for both Rhaenyra and Laenor.

Rhaenys had to consider what was best for the future of her house, and her bloodline – especially since Daemon doesn’t seem to give a damn about his daughters Rhaena and Baela. In warding Baela, I would like to think that Rhaenys was trying to prepare her to rule Driftmark one day.

Rhaenyra’s marriage proposal before the weirwood tree also works in Rhaenys’ favor, as her granddaughters marrying Rhaenyra’s (Strong) bastards does eventually put Velaryon blood back on the Driftmark throne.

Despite Vaemond being correct in asserting that Rhaenyra’s children are bastards, he really should have taken the issue of succession up with his older brother, Corlys.

I remember in episode two I believe, Lord Corlys made a point of saying to Daemon that they were “the realms second sons” and that Corlys had built everything he owned with his hands.

Even then during the conflict on the Stepstones, Vaemond was questioning Corlys and sowing discord in the troops when I’m sure most of the fleets, troops, and rations were supplied by Lord Corlys and his self-made immensurable wealth.

So for Vaemond to turn around once he knew his brother’s health may be failing, and demand Corlys’ seat on grounds of being his “rightful heir” despite Lord Corlys already naming Lucerys Velaryon as Heir to Driftmark, was utterly ridiculous to me.

Viserys even calls the tactic out by claiming Vaemond was “no more than a second son”, implying he was trying to covet his brother’s wealth and inheritance.

While Vaemond advocated for the legacy of his house, after Princess Rhaenys had secured a marriage alliance that would place Lord Corlys blood back on the seat of Driftmark through his daughter Laena, Vaemond still continued his argument.

Showing that Vaemond cared more about his personal greed than the future of his house – something he would continuously assault and admonish Corlys character for.

Just to quickly mention this, just as meaningful conversations happened before the weirwood tree in the Red Keep, a rat could be spotted in Viserys Old Valyria diorama. Based on this, it would seem Larys may have the whole truth of what happened leading up to Rhaenyra’s marriage proposal for her Strong boys, and the true nature of Aegon’s prophecy.

Oh, Daemon’s former flame Mysaria returns – revealing that the servant Alicent tasked with bringing moon tea to Prince Aegon II’s latest victim is indeed a spy working either for or against the Targaryen and Hightower houses on whole.

It was an emotional rollercoaster watching this series, and I am excited for the upcoming penultimate and series finale episodes.

But what were your thoughts this week?

Do you think Mysaria’s return bears a bad omen for Daemon?

Why did Alicent purposefully misinterpret what King Viserys said on his deathbed?

Should Rhaenyra have stayed in the Red Keep to care for her ailing father?